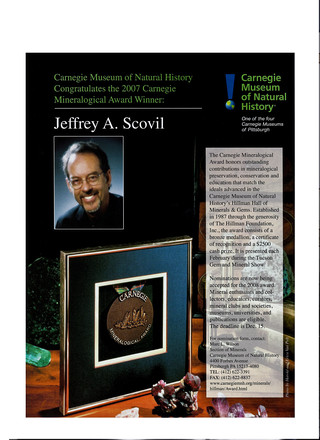 When Jeff got his first camera from his Father at High School graduation, it was the beginning of a life long passion. Jeff grew up in Connecticut and had been collecting minerals and fossils since he was eight years old and started undergraduate school majoring in geology. He eventually switched to anthropology and archeology and after one field season on a dig in New Mexico he became the site’s laboratory photographer. Jeff studied what little there was published on archeological photography. Finding the literature minimal, he started researching scientific photography from other fields as well and applying what he learned to archeological materials.
After three years in the photo studio at the dig, he decided to apply the techniques he had learned to his other passion of minerals. Initial results were disappointing but Jeff kept at it and starting gaining recognition for his work. He started doing photography for other collector’s articles for the popular magazines in the hobby such as the Mineralogical Record and Rocks and Minerals. Always one to share his knowledge, he wrote a series of articles on mineral photography that appeared in Rocks and Minerals magazine in the 1980s.
Jeff moved to Phoenix, Arizona for graduate work in anthropology, archeology and museum work in 1977 where he could continue field collecting in the wonderful mines of Arizona. There, he also attended the Mecca of mineral shows in Tucson for the first time. He eventually started the Seminar in Mineral Photography held at the Tucson Gem and Mineral Show every year for over 25 years now. Jeff also revived the discontinued mineral photography competition at the Tucson Show and has also run it for some 25 years.
Although Jeff did work at a number of Museums through the years including the Ariona Mining and Mineral Museum, he ended up not making either archeology or museum work his career. In 1990 he was at a crossroads in his work and decided to take a chance and make photography of minerals a career. The rest as they say, is history. It took years of hard work to build up the business, the quality of his work and his reputation, but Jeff has become the acknowledged leader of mineral photography in the world. His work is featured in all the mineral magazines in the United States as well as Europe and is Associate Photographer for several of them. His work also appears in many gem and jewelry journals as well as numerous text books. Jeff’s photos have appeared on hundreds of magazine covers as well as many mineral show posters world wide.
Jeff travels the world photographing for collectors, museums, dealers and publishers. He also makes many public presentations on photography, mineralogy and travelogs. His work has taken to many places including Brazil, Canada, China, Israel, Madagascar, Morocco, Russia, and most of Europe.
In 1996 Jeff published the only book ever written on his specialty (Photographing Minerals, Fossils and Lapidary Arts. Geoscience Press). In addition to articles on photography, Jeff has published numerous reports on what is new in the way of new mineralogical finds at shows, articles on mineralogy and mineral localities. He has been a member of mineralogical clubs in Connecticut and Arizona holding different positions including President and show chairman. Jeff is also a member of the Mineralogical Society of America. In recognition of his contributions to mineralogical education and preservation, Jeff was awarded the 2007 Carnegie Mineralogical Award at the Tucson Gem and Mineral Show.
© Scovil Photography
Powered by ZENFOLIO User Agreement
Cancel
Continue